ALL THAT JESUS BEGAN BOTH TO DO AND TEACH

Acts 1:1-5 — “The former treatise have I made, O Theophilus, of all that Jesus began both to do and teach, Until the day in which He was taken up, after that He through the Holy Spirit had given Commandments unto the Apostles whom He had chosen: To whom also He showed Himself alive after His passion by many infallible proofs, being seen of them forty days, and speaking of the things pertaining to the Kingdom of God: And, being assembled together with them, Commanded them that they should not depart from Jerusalem, but wait for the Promise of the Father, which, said He, you have heard of Me. For John truly baptized with water; but you shall be baptized with the Holy Spirit not many days hence”.

“ALL THAT JESUS BEGAN BOTH TO DO AND TEACH”

So, what did Christ do and teach? In a very simple response, Jesus Christ preached the gospel, healed the sick, cast out devils, and spoke of the infilling with the Holy Spirit (John 14:15-18; John 16:4-15; Acts 1:8), which means that we are to do those same things today. We are to preach the uncompromising Word of almighty God, we are to lay hands on the sick, cast out devils, and pray for believers to be filled with the Spirit. Christ also preached the Bible, which, at that time, consisted of the Old Testament scriptures, but He also laid the foundation for the New Covenant, which would be given to the apostle Paul by revelation. His teaching to the children of Israel was beyond what the law of Moses could ever provide, and was the very fulfillment of the law of Moses, at least as it pertains to the ceremonial law. This means that Christ is the foundation, standard, and principal for all things. As well, the book of Acts is to serve as a pattern of description for all that Jesus did and taught, meaning it should be the model for our present-day churches. If churches stray from that pattern, then they are not continuing what “Jesus began both to do and teach.” The Holy Spirit ordained the criteria in the book of Acts that we are called to emulate. Unfortunately, many today do not honor this call, and that is a shame. But the ones who do, touch the world, as they continue on with what “Jesus began both to do and teach.”

I want you to picture this in your mind’s eye. It was a beautiful and remarkable moment to witness. Jesus standing on the Mount of Olives, with five hundred people surrounding Him, each one waiting eagerly for what He would say. His disciples had seen him for forty days, testifying with unmistakable proof that He was alive and performing miracles for those in need. Jesus, standing before the people, with the nail prints in His hands and feet, the piercing in His side, was about to give His final discourse before His ascension. These standing before Him had no knowledge these would be His last words, and no doubt they wondered with much speculation as to what He would say. He could have spoken about anything, but what He chose to speak about did not sit well with the majority, in fact, many would ignore His last words.

The Last Words Of Christ

Let us address something here for a moment. We understand that the last words from anyone may be important to some, yet not important to others. However, this of which we are speaking is much different from the last words of a loved one, friend, or family member. These were the last words of Jesus Christ, our Savior, and should be treated accordingly. Interestingly enough, His very last words begin with a command, not a simple suggestion, or even a witty remark, but something that must be followed and carried through. This command was to be filled with the Holy Spirit with the evidence of speaking with other tongues. That word command means, “to charge,” and is a military term that must be heeded. It is comparable to a commanding officer in the Unites States Armed Forces giving an order to his subordinate, and once that order is given, it is not up to the subordinate to think about it, or consider it, or even shrug it off, but to follow that order to the proverbial “T.”

Christ, as mentioned last week, could have spoken about any number of things, but He used this opportunity to command His disciples that they needed the infilling of the Holy Spirit. In other words, He was telling His disciples not to plant churches, to have services, to sing, to preach, to teach, or anything else until they have been endued with power from on high. This was a striking statement that many turned away from then, and many are turning away from today. But it must be understood, as Christ issued this command, He was expecting them to continue in all that He had begun to do and teach. Jesus, although very God, was also very man. As Keith Babin, my associate has stated, “Christ is the only 200 percent Man to ever live, for He was 100 percent God and 100 percent Man.” Everything Christ did while He was on earth, every miracle He performed, every message He preached or taught, was not done as God, but rather as a man full of the Holy Spirit. He spoke as no other, He acted as no other, and He lived as no other. He was a man full of Holy Spirit power. He knew that He was going away, and He told His disciples that He would send another Comforter (John 14:6), to be with them, to lead them, to guide them, and to help them with the furthering of the gospel. This was to be the continuation of Christ’s work through His disciples.

Is This Command Still Relevant Today?

Look at the above heading very closely. Is that command given by Christ nearly two thousand years ago still relevant in today’s modern times? The answer to that question is “yes” and “no.” No, because we don't have to travel to Jerusalem and wait for the promise of the Father, for when the Holy Spirit came on the day of Pentecost, He never left. And yes, because we are to continue on with His work in this present time. We need the baptism with the Holy Spirit to fulfill what God has called us to do. Once again, everything that has been done and is being done on this earth, with the exception of the First Advent of Christ, was done, and is being done by and through the office work, agency, power, and person of the Holy Spirit. Whatever is not done by and through the Holy Spirit must be constituted as a work of man, which God can never honor. What I am about to say may be disapproved of by many, but I feel it to be true—if any preacher, or any Christian for that matter, ignores this command given by Christ for our benefit, then they are disobeying Christ, and whatever is done will carry no spiritual significance whatsoever. Ignoring this command given by our Commander in Chief is like a Private ignoring the command of his superior officer, which will not turn out well for that Private. I believe that baptism with the Holy Spirit is not merely optional, but rather it is essential for every single believer to help them accomplish what God has called them to do, and to help them live a victorious Christian life. 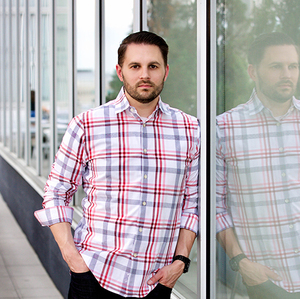 Gabriel Swaggart has been in full-time ministry for 15 years. He serves as associate pastor for Family Worship Center, is an integral presence on the <a href="http://sonlifetv.com" target="_blank">SonLife Broadcasting Network</a>, and is Lead Pastor of Crossfire Youth Ministries. In addition to his administrative and ministerial responsibilities at <a href="https://jsm.org" target="_blank">Jimmy Swaggart Ministries</a>, he also preaches several annual U.S. rallies.